"Violence in Shaw is not a legislative problem" 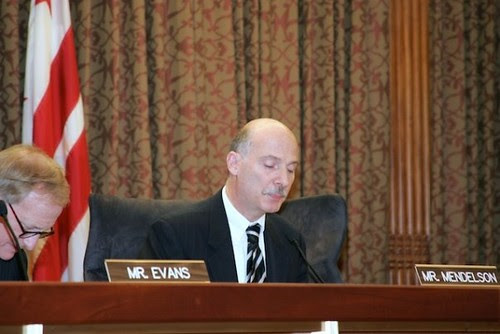 Councilmember Phil Mendelson, who chairs the Committee on Public Safety and Judiciary, at a 2008 hearing. Photo credit: thedccenter on Flickr.


It's a statement that is a bit troubling, particularly when it comes from the official who chairs the DC Council's Committee on Public Safety and Judiciary, Phil Mendelson.

It came in response to an e-mail from a concerned resident who wrote his elected officials asking for help after two daytime shootings on Wednesday. The first occurred at 4pm at the Shaw metro stop located at 8th and R Streets NW. The second occurred just two hours later near 7th and N Streets NW. My understanding that no one was hit in either shooting, but falling near a metro stop and a school, it's just sheer luck.

Few, if anyone, would disagree that crime is far more than a legislative issue. Solving gang violence requires sufficient police resources, committed officers and detectives, and a clear strategy. It requires effective prosecutors and judges who don't accept insufficient pleas for violent crimes. It requires a community that is not willing to tolerate those involved in the shootings. It also requires creating an environment that does not attract crime -- by addressing vacant properties and well maintaining the streets. In the long term, reducing crime requires improving our schools, providing job training and work opportunities, providing positive recreational options, and formal and informal mentoring.

But addressing gang violence is also a legislative issue. It is the DC Council that is responsible for giving the police the tools they need to most effectively do their job and providing prosecutors with the leverage to obtain pleas or convictions that keep violent offenders in jail. Obviously, as residents of my neighborhood face day-to-day gunfire, something is not working.

The recent anti-crime bill included several tools to address gang violence. Some passed. Other important elements did not. For instance, Councilmember Mendelson led a vote against civil gang injunctions, which would have allowed prosecutors to obtain court orders prohibiting "known gang members" from engaging in a range of activities, such as associating with other gang members. Some cities have enacted such laws, which have begun to have an impact. Councilmembers who agreed with Mendelson expressed concern that it would give too much discretion to police, might lead to racial profiling, and would label kids as gang members forever. Alternatively, Councilmember Barry suggested continuing to give millions away to groups like the Peaceoholics, you know, the organization that received $10 million of taxpayer funds and a fire engine to the Dominican Republic in recent years, among other infractions, with no accountability for results.

But that's not all. During deliberations over the bill, Councilmember Mendelson also expressed reluctance to support an amendment that would have made it easier to keep in prison those who are charged with gun crimes while they await trial. He showed his utter lack of understanding of what is happening in our community when he claimed from the dais: “It’s not clear how real that revolving door is." It's quite clear from my front door, however. Fortunately, the Council passed that measure.

In his e-mail to the concerned constituent, Councilmember Mendelson also restated his opposition to enacting an anti-loitering law for DC, saying it is plain 'ol unconstitutional. True, ten years ago, the U.S. Supreme Court struck down a Chicago law because it was too vague and provided too much discretion to police, but that law has since been rewritten. DC's version of an anti-loitering law are those "drug-free" or "prostitution-free" zone signs. They give the police the ability to order those lingering about and who appear to be engaged no good to move on. But their impact is highly limited to a small area for a few days at a time. I often hear the question, "why isn't it always a crime free zone?"

Several members of the Council support enacting a broader anti-loitering law including Jim Graham (Ward 1), Jack Evans (Ward 2), Muriel Bowser (Ward 4), Yvette M. Alexander (Ward 7), Kwame R. Brown (At Large), and David Catania (At Large). That's six of the thirteen member DC Council. Having the chair of the public safety committee on board could make the difference.
Finally, for good measure, it is also worth noting that Councilmember Mendelson was a proponent of reducing, then eliminating, the vacant property tax that was finally, FINALLY!, having an impact in moving vacant row houses and lots that plague Shaw back into productive use. More to come on that in a future post.
Posted by Cary Silverman at 5:14 PM

Are you serious? I honestly thought more of you when you for council, but after reading this I just don't know. You really wrote

Councilmember Mendelson led a vote against civil gang injunctions, which would have allowed a prosecutor to obtain a court order prohibiting a "known gang members" from engaging in a range of activities, such as associating with other gang members.

They are already criminals and by definition do not follow the law. This is not a legislative issue, this is an enforcement issue and the police have all the tools they need to stop crime. Communities need to stand up and hold police and the government accountable. Not a feel good bill written on paper.

It's incredible that anyone would blame others for not acting strongly enough, when they've worked to weaken the laws and other tools that are used.

While you may disagree with some of Mr. Mendelson's positions on other issues, his was one of the few voices of sanity during the frenzied debate over the crime bill. Despite your assertions, there is absolutely no evidence that so-called civil "gang injunctions" work. They have been used in California amid much controversy, and shown to be ineffective. This was shown at the Council hearings. Most of the Mayor's crime bill did pass, and we will be paying for this draconian legislation for years, with no appreciable impact on public safety.

Further, the anti-loitering bill you support was actually withdrawn by Councilmember Graham for the same reasons Mr. Mendelson opposed it: the proposed bill was overly vague, with broad potential for abuse. It would have allowed police to arrest people for being on the sidewalk in front of their homes, or anywhere. This is not a crime. If people are disruptive or creating a public nuisance, if they are blocking an entrance to a business or home, or otherwise breaking the law, they can be subject to arrest. As Mr. Graham noted in his statement withdrawing the bill, it could be used in ways not envisioned by its drafters and would not achieve the goals sought.

There are many, important ways to protect the public against crime, starting with addressing some obvious causes. Hundreds of people are released from the DC Jail and federal prison to DC every month. As many as half have no place to live or work. Under these circumstances, it is remarkable that there is not more crime under these terrible circumstances. We cannot arrest our way into a safer community, but we can create a better community. Such efforts would be cheaper and much more effective

"Despite your assertions, there is absolutely no evidence that so-called civil 'gang injunctions' work."

Which is just a statement without backing information or citations...

...makes it just another assertion.

"We cannot arrest our way into a safer community"

If anything that the last 10 years of falling crime rates teaches us, it's that "arresting our way out of the problem" is the only strategy that actually works. You can hand out all the housing vouchers that you want, but they only perpetuate crime. The best strategy is to write off the urban hoodlums, and lock them up before they hurt someone else.

Regarding gang injunctions, check out a 2007 study:
"Gang Wars: The Failure of Enforcement Tactics and the Need for Effective Public Safety Strategies" 7/17/07; Judith Greene and Kevin Pranis (http://justicepolicy.org/content-hmID=1811&smID=1581&ssmID=22.htm).

Regarding this breathtaking statement: "The best strategy is to write off the urban hoodlums, and lock them up before they hurt someone else." I can scarcely believe you are an attorney. Even if you could identify your "urban hoodlums" and "lock them up," how long do you suggest? 20, 30, 40 years per stolen car or drug sale? Yes, it is unfortunate that your quiet urban existence is interrupted by the moaning and occasional explosions of the homeless, the unemployed, the starving, the enraged in our community. You may be familiar with the old Anatole France line: "Both rich and poor alike have the same right to sleep under a bridge." Please move back to Reston where you belong.

Hh yes for answers on how to stop gangs from rampaging our neighborhoods, let's turn to the bookshelf of an org that has as its mission statement that it is "dedicated to ending society’s reliance on incarceration."

No need to search for that study on their website, Mendo probably has extra copies handy.

You do realize, don't you, that in some cities, it is simply illegal to even belong to a gang? But Mr. Mendelson has time for opposing measures that would simply allow police to keep better track of them in DC.