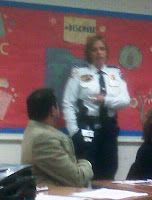 "Have detectives called you to follow up," asked MPD Chief Lanier.   "No," said the Shaw resident, whose home was burglarized twice in two months.  "That's not acceptable," said Lanier, asking Third District Commander George Kucik to report back to her on the situation.

Another resident received a text message early one morning from her next door neighbor asking her to call the police because there was a man with a box cutter in the midst of burglarizing his house while he was home.  It took 15 minutes for the police to show, she said, as the man rummaged through the home at 10th and N.  "He even helped himself to a beer," said the clearly distraught resident, who attended with her husband.  Chief Lanier noted that she is in contact with the Office of Unified Communications, which handles the dispatchers, about the failure.  Such calls, Lanier noted, are to receive the highest priority, and, in fact, her officers responded within 3 minutes of actually receiving the call.

Another resident expressed frustration that he calls 911 in regard to the drug dealers in front of his house every day, but they have police scanners and often leave before the police arrive.  When the police get there, residents are told that the police cannot arrest anyone unless they personally view a drug transaction, even if neighbors are willing to provide witness statements.  Now, his family has installed cameras to videotape the activity, but even then the officers say the evidence is insufficient.  Commander Kucik responded that MPD prefers not to use resident videos as evidence in court because they can place residents at risk.  They prefer other means of gathering evidence.

ANC Commissioner Alex Padro expressed his disappointment that the police lieutenant for the Shaw neighborhood failed to show up for his own Police Service Area (PSA) meeting last month, exasperated with a history of dysfunction in the PSA.  In fact, no Third District officer appeared.  And that was on a day following two shootings.

"How do we address the revolving door," a resident who has had at least 3 shootings, some ending in murder, in front of his door over the short period of time he has lived near the 1200 Block of 7th Street NW. "There is not a single person that is doing that we have not arrested, 5, 6, 7, 8, 9 times with a gun and who is not back on the street," responded the Chief.  "We just arrested someone for burglary that had 41 prior arrests."  The resident suggested mandatory minimums for gun-related crimes.  "Repeat violent offenders is who we need to focus on... Not locking everyone up," said Lanier, noting that the prisons are full.

CCCA President Martin Moulton turned the discussion to legislative issues, asking Councilmember Evans to discuss the re-introduction of his anti-gang bill, particularly civil gang injunctions, which I explained in an earlier post.  Evans noted that his proposal, which is used in other cities, has the support of five councilmembers and needs the support of two additional members to be enacted into law.  He noted that Councilmember Mendelson believes that the measure does not work and may actually be counterproductive.  Nevertheless, Evans says "try it" and let's see. He not even sure if Councilmember Mendelson will even schedule a hearing on the bill.

Chief Lanier noted that MPD already keeps a "validated" list of known gang members.  The police also maintain a list "known associates."  For example, with respect to the individual who killed 9-year-old Oscar Fluentes in Columbia Heights, Josue Pena, she was careful to note that he was a "known associate" of  MS-13, not that he was a member.  "MPD doesn't randomly label people," she emphasized.

Councilmember Kwame Brown indicated that he initially voted against the measure and that he wants to be convinced that it will stop crime before he will vote in favor of it.  K. Brown quickly shifted the discussion to what he viewed as more important, job training.  "Let's keep Phelps, Cardozo, and Hospitality High School open nights, weekends, and summers," he said, expressing disappointment that the District spends less than $3 million on job training.  "If there is a one percent chance. Let's try it," said K. Brown of the Evans' proposal.  "Now you have 6," referring to his willingness to vote for the measure, though he noted that he would also "want something on the front end."  "Kids graduate but still can't read and can't get a job."

Councilmember Michael Brown noted his opposition to the measure.  "In LA, nearly half of black men were entered into a gang database and that's going to impact their getting a job," he said.  He gave the hypothetical of his twin 16 year-old-sons, who take metro, and, if they happen to talk to a gang member they didn't know was a gang member, could get listed as a "known associate" of a gang member.  M. Brown stated that he could vote in favor of the measure on a temporary basis only if it included language to protect people from being wrongfully characterized.  "It puts young men of color at risk for the rest of their lives."

No one would suggest that civil gang injunctions are going to solve all our crime issues, but will they do more good than harm?  Are concerns that it will adversely impact young men of color justified?  As I understand it, keeping in mind that Councilmember Evans has not actually yet introduced his new proposal:
In regard to the "revolving door" and the possibility of mandatory minimums for gun possession, I think that may or may not be needed.  What deserves close consideration is pre-trial detention - is this the flaw that that leads courts to immediately release those arrested for gun-related crimes back on the street as they await far-off trials that are ultimately pleaded down?
Posted by Cary Silverman at 12:06 AM

Nice rundown, Cary. We've heard feedback from Evans and K Brown, but M Brown has not yet responded to your points regarding his concerns. I hope you hear from him soon after the holiday.

Surely these lists wont hurt District Government Employees, since convicted criminals can work for the DC gov't -- at least, ironically, in the Dept. of Youth Rehabilitation Services (DYRS) -- and even hold the office of Mayor and Councilmember.

I'm told that even current police records of convicted criminals who've been recently re-arrested are difficult if not impossible to obtain from MPD or any other source — even after being FOIA'ed and petitioning the Mayor with appeals. So, I bet the lists and injunctions wont get in the way of anyone's educations or future employment.

So for gosh sake, let's give the civil injunctions a try for at least six months and see if it helps.

I agree with CM K Browns' concern for education and jobs, but those are a long term goals for many individuals who are involved with crime and have had chemical abuse problems. Since K Brown and CM Gray live in CM Yvette Alexander's Ward 7, which has one of the highest rates of violent crime among Wards in the District, I'd hope Mr Brown would have some interest in some short term solutions to help keep his own family safe — not to mention his neighbors and fellow law abiding citizens.

It looks like civil gang injunctions are on the agenda for the Dec. 2 ANC 2C meeting. I wonder if both sides of the issue will be discussed.

Someone from Alliance for Concerned Men is on the agenda to give a warm and fuzzy story about his life experiences, but I wonder if he will bring documentation on how much tax payer money the organization gets from DC and grants, and how that money is actually used. Hopefully not just summer camp for criminals, with no community benefit in the form of demonstrated stats on how many are placed in full time employment, how many return to school full time, and how many avoid recidivism.

The stats many are concerned with is are these organizations making a verifyable difference reducing crime, nuisances and violence in our neighborhoods.