Home Again: The Good, The Bad, The Ugly

In 2002, Mayor Anthony Williams introduced the "Home Again" initiative, a program designed to transform vacant and abandoned residential properties into single-family homeownership opportunities for residents.  About a year ago, it died, and no one even noticed.

The program "bundled" groups of vacant houses and lots.  It placed the bundles up for purchase by developers meeting certain qualifications.  Developers were required to set aside a certain number of the houses in the bundle for affordable home ownership opportunities, while it would set the remainder at market rate.  Keep in mind, these are not large city-owned properties like school or office buildings, but private homes that fell into government hands usually because of a calamity, such as a fire or collapse, or because it was abandoned.

While the program had some initial successes, I came to notice that many of these properties, sat and sat some more.  Given the emphasis placed to addressing privately owned vacant properties through the vacant property tax and increased enforcement, it seemed wrong that city-owned properties were left to rot.

A Mount Vernon Square house in the program (460 Ridge Street NW) collapsed in November 2007 and the lot was then neglected.  Nearby, another property in the program, a historic facade, remained in that state for years while nearly every other house on the block was renovated and sold (454 N Street NW).

Last summer, I decided to investigate.  I found that the District's Home Again website had not been updated since April 2004.  It remains in that state today.  I also tried to find out the status of the properties in the Home Again program the old fashioned way -- calling.  The phone number listed for the program immediately went a voice mail that appeared to be a wrong number.  There was no e-mail contact information listed on the website.

Finally, I found a number for Home Again on a 2006 press release that led to the Department of Housing and Community Development's "Property Aquisition Disposition Division."  On the third try, I reached someone. "There really isn’t a Home Again program," she said.  Responsibility for the program now is through the Aquisition Disposition Division, which is now auctioning off the properties.

That brings us today.  One year since my initial inquiry I toured Home Again properties.  Through DC Atlas, I found 113 properties identified by the city as in the program.  One in four are vacant homes ("vacant improvement") and the remainder are empty lots.  They are in every area of the city except Ward 3.  The most, 47, are concentrated in Ward 5.  I began by visiting properties in Wards 1 and 2.

I expected the worst.  Overall, however, the properties are secure and maintained.  That may not have been the case for many of them months ago, before "No Trespassing" signs suddenly appeared.

Two of the lots included a notice that they were among 18 to be auctioned off on June 30, 2010 at the Washington Convention Center - 501 Rhode Island Avenue in Shaw and the prime real estate Logan Circle property at 1335 R Street NW (The Victorian next door to the Logan Circle property sold for over $1.1 million in 2000).  According to Housing Complex, the 13th and R Street lot went for $590,000 after a bidding war.

According to a press release, this was the second such auction of government-owned vacant property by the Property Acquisition and Disposition Division [results of the 1st posted here]. Only bidders in specific categories were allowed to participate in the auction: home buyers who intend to occupy the property as their primary residence; non-profits; and DC Certified Business Entities. The Department of Housing and Community Development will hold a public hearing in August to announce the proposed disposition plans for the auctioned properties.  That may be progress.

There were some bad cases.  In Ledroit Park, a historic corner property at 475 Florida Avenue NW has a skylight that is not of its own making.  Curious that it sits in this condition, since it was apparently auctioned off by DC in the first batch of vacant properties for $300,000 in January 2009 - did the sale fall through?

It's only a matter of time before what is left of 454 N Street NW collapses like its neighbor at 460 Ridge Street NW.  At 1319 Harvard Street NW, neighbors appear to have taken charge by hiding an enclosed empty lot with a beautiful flower garden.  Good for them!

The ugly, however, is 709 Kenyon Street NW.  Posted prominently on the front of the house is a notice by the fire chief condemning the property as unsafe.  The rear of the house, along with the roof, has partially collapsed.  The alley alongside the property was filled with trash and empty beer cans and bottles. 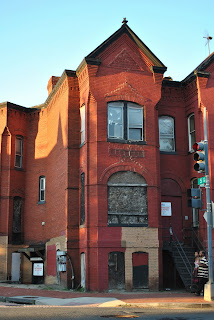 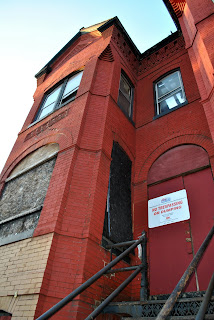 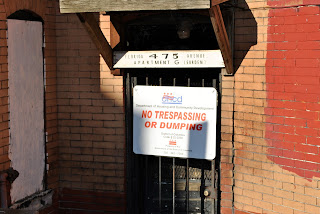 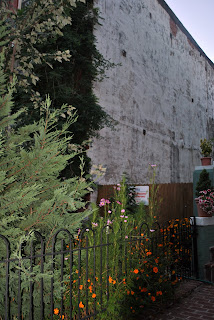 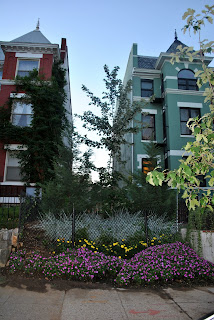 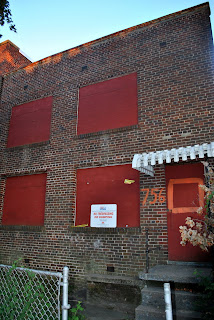 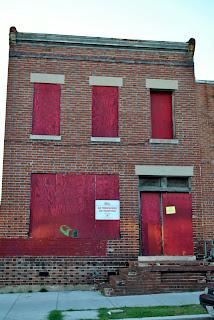 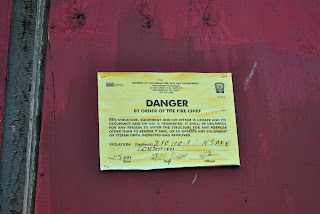 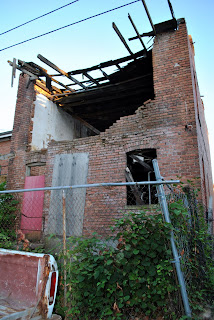 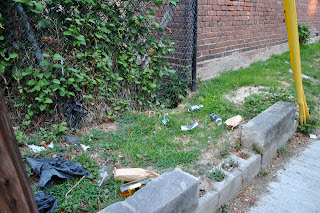 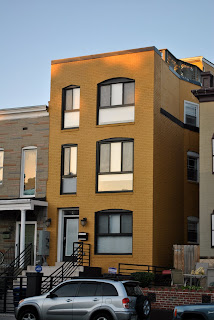 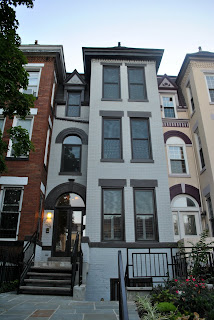 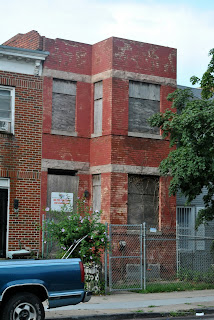 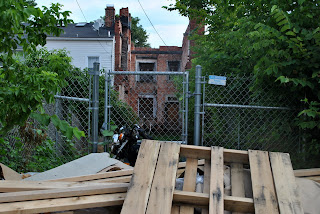 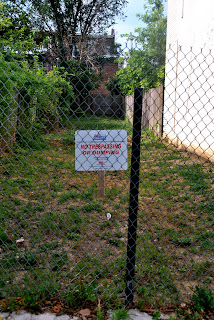 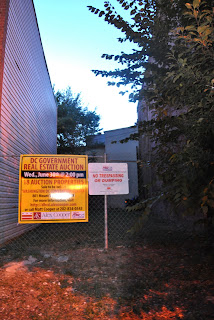 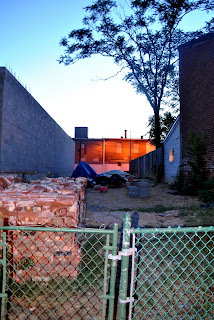 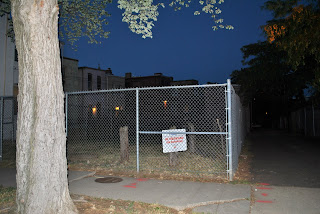 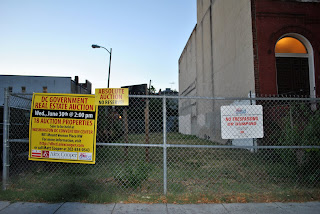 Posted by Cary Silverman at 1:46 AM