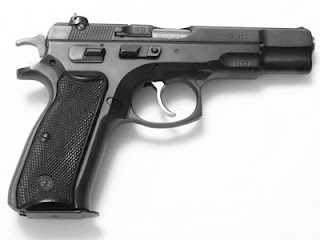 If you closely watched the race for Ward 2 in its final months, you'll remember that my opponent, Councilmember Jack Evans, attempted to label me some type of gun nut.

(1) He represented that I was a gun industry lobbyist, which anyone with an internet connection could have looked up in 10 minutes on the federal lobbying disclosure database to find was patently false. Now, I do have more experience with guns, but because that's because I live in Shaw; and

(2) I had the audacity to suggest that in shaping a new gun law for DC following the U.S. Supreme Court's ruling in Heller, it would be odd to allow a small business owner, say a corner store, to have a gun for protection when upstairs at home, but not downstairs the store, where, of course, the danger of robbery is greater. A court would likely strike down the law in a New York minute, making us again the laughingstock of the country. Councilmember Evans in debates, on the radio, and to newspaper reporters, portrayed my view as wild. "No one is even talking about extending the law to allow businesses to have guns," he said.
Here's the text of exactly what Evans' campaign wrote in an August 7, 2008press release entitled, "Audience Favorite, Jack Evans Wins Debate against Pro-Handgun Opponent":

The debate drew but one surprise when Councilmember Evans spoke of limiting the prominence of handguns in the district in the wake of Heller v. DC while his opponent, gun industry lobbyist Cary Silverman, called for the use of handguns to be expanded beyond private residences into places of business. It is unfortunate that Silverman must learn the difference between representing his lobbying clients in the gun industry and serving the residents of the neighborhoods of ward 2.

It's also unfortunate when politicians say anything to get elected. Last week, with Councilmember Evans' support, the D.C. Council unanimously passed legislation doing just that.
In fact, the legislation that passed first reading sounds similar to what I proposed. News reports say that the legislation requires mandatory safety training, prohibits those with a history of domestic abuse or those convicted of violent crimes from owning guns, and for guns to be kept out of reach from children (I actually don't see those provisions in the introduced bill, but good luck finding anything on the Council's horrible "LIMS" - It was probably amended with the changes not reflected online). And, the proposal allows D.C. residents to keep a loaded and unlocked handgun "at his or her place of business, or while being used for lawful recreational purposes within the District of Columbia, or for the purpose of immediate self-defense in his or her home.” It's up for second reading on December 16. (I would have also imposed strong civil and potentially criminal penalties for owners whose guns fall into the wrong hands and are subsequently used in crimes).
Kojo, Segraves, Stewart, Kennedy, Ch. 9 -- you were all duped. Some credit goes to Debonis for at least debunking the gun lobbyist myth during the campaign, rather than letting it slide. Is anyone going to call him out on this flip flop? What suddenly changed in three months to make something so radical... so unanimous?
Posted by Cary Silverman at 12:01 AM